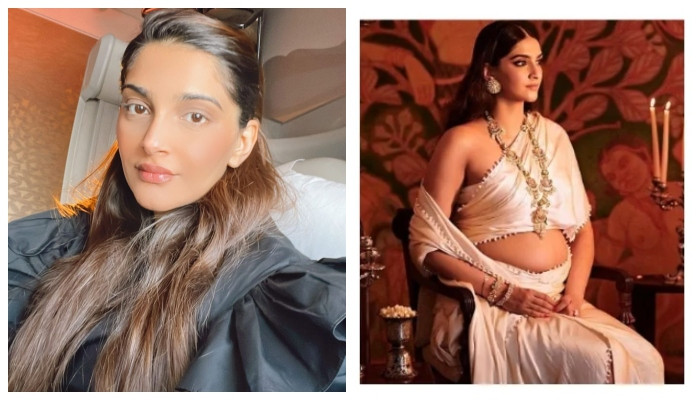 The pregnancy glow is unmissable on the face of Sonam Kapoor Kapoor in the latest selfie.

The Khoobsurat actress is soon going to be a mother and is currently enjoying one of the most special phases of anyone’s life.

In March this year, the Veere Di Wedding actress took to her social media handle and announced her pregnancy through a lovely photoshoot with her husband Anand Ahuja alongside a heartfelt note.

After her pregnancy announcement, the diva has already shared so many looks. Speaking of which, the to-be-mother shared a gorgeous selfie on social media.

Taking to the stories section of Instagram, Sonam shared the adorable picture and flaunted her pregnancy glow. She was casually dressed in the photograph.

It was just last month in March when she had announced her pregnancy with Anand and shared some breathtaking pictures from her photoshoot.

She wrote, “Four hands. To raise you the very best we can. Two hearts. That will beat in unison with yours, every step of the way. One family. Who will shower you with love and support. We can’t wait to welcome you. #everydayphenomenal #comingthisfall2022.”

To note, Sonam and Anand married in May 2018 after dating for almost four years.

Recently, during her conversation with Vogue India, Sonam stated that the first trimester of her pregnancy hasn’t been easy. “If you want to carry another life within you, you have to respect your own,” the mom-to-be was quoted saying.

On the work front, Sonam Kapoor was last seen in AK vs AK with her father Anil Kapoor. She will be next seen in Shome Makhija’s upcoming movie Blind with Purab Kohli and Vinay Pathak. It is a remake of the 2011 Korean film of the same name.