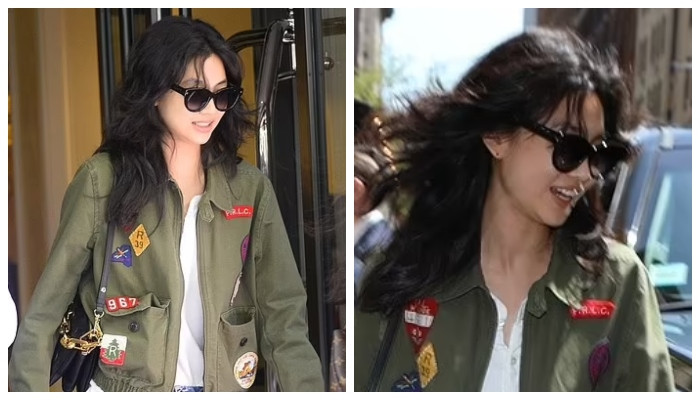 HoYeon Jung left onlookers awe-struck as she flaunted her svelte figure in a military jacket and low-rise blue jeans in NYC on Sunday.

The Squid Game star – who now goes by Hoyeon donned an olive-green military jacket that was embellished with vintage patches as she was spotted leaving The Mark Hotel on the Upper East Side.

The 27-year-old actress sported brown leather shoes and shielded her eyes from the sun with tortoiseshell-framed black shades.

The brunette beauty wore her long locks down in loose waves and rocked a nude lipstick.

The Louis Vuitton brand ambassador toted a black and gold handbag by the famed fashion house and carried her iPhone.

Last month, Hoyeon starred in the music video for The Weeknd’s new single Out of Time, which also featured a cameo from Jim Carrey.

In March, Hoyeon won the SAG Award for outstanding performance by a female actor in a drama series for her acting debut as North Korean defector Kang Sae-byeok in Squid Game.

The star joked to Vogue in January that she’d love to return for season two of the smash hit Netflix series in the same way deceased characters come back to life on the Korean soap opera Penthouse.