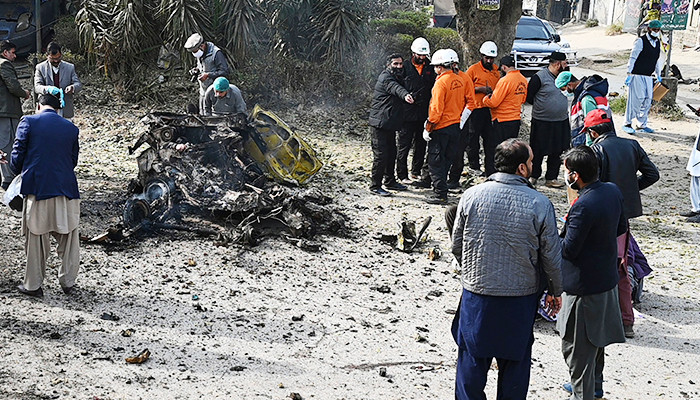 The minister, while giving further developments into the probe of the attack which claimed the life of a cop and wounded several others, said: “The banned Tehreek-e-Taliban Pakistan (TTP) accepted the responsibility for the attack.”

He said the “taxi driver is innocent”, and he was not involved in the attack as the suspects had taken the cab on rent from him. The suspects, according to Sanaullah, travelled from Kurram Agency to Rawalpindi.

Last Friday, a suicide attacker, riding a cab with a woman, blew himself up when four bike-riding cops of Eagle Squad intercepted them at Sector I-10/4 — sending the federal capital into a frenzy.

As a result of the blast a police official was martyred, while seven — including a policeman and civilians were injured — police told the media. Later, a joint investigation team (JIT) was formed to probe the suicide bombing.

“We have rounded up four to five suspects and their handlers have also been apprehended,” the security czar said as several embassies — including the United States, Saudi Arabia and Australia — warned their citizens not to travel unnecessarily in the federal capital.

The first was the US, which advised its mission personnel to avoid “non-essential and unofficial” travel in the federal capital throughout the holiday season. Later, other countries issued similar advisories.

Pakistan is battling a fresh wave of terrorism after the outlawed TTP announced ending a ceasefire with the country and upped attacks on civilians and security forces alike.

As many as nine intermittent blasts hit Balochistan leaving five soldiers, including a captain, martyred and injuring 15 others on Sunday.

Earlier this month, militants took over a Counter-Terrorism Department (CTD) compound in KP’s Bannu area, which was cleared by the Pakistan Army three days later. However, four soldiers embraced martyrdom and 10 sustained injuries.

But the government and the army have expressed the resolve to ensure that the rising terror will be nipped in the bud before it grows out of hand.

In his address during a ceremony a day earlier, Prime Minister Shehbaz Sharif reiterated his resolve to uproot the menace of terrorism by using all resources available in Pakistan.

“We are working hard to prevent them. We will employ all resources to uproot terrorism to bring peace in Pakistan,” he added.