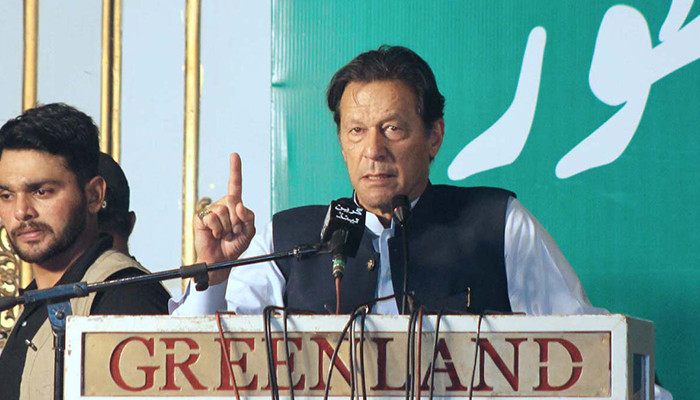 The Cabinet Division, in the wee hours of Monday, denotified Cheema after President Arif Alvi rejected PM Shehbaz’s advice to remove him from the office of the governor.

In his statement today, the former prime minister, referring to the government as “imported puppets”, said it was “attempting to create an atmosphere which would lead to constitutional chaos.”

Despite constitutional safeguards, an attempt was made to remove the Punjab governor through “shameful means”, Khan said, adding that “all were silent” when the Constitution was being openly violated in Punjab.

“It is imperative that the Supreme Court, in view of the delicacy of the situation, should look into the matter on its own,” the ex-prime minister added.

The call for Supreme Court’s intervention come as the president had “strongly rejected” the prime minister’s advice to remove Cheema, but the Cabinet Division still de-notified him as governor.

“In terms of Article 101 and proviso to Article 48 (1) of the constitution of the Islamic Republic of Pakistan, read with serial No. 2D of schedule V-B to the Rules of Business, 1973 and the Prime Minister’s advice (s) rendered on 17-04-2022 and 01-05-2022 for removal of Governor of Punjab, Mr Omer Sarfaraz Cheema ceases to hold the office of the Governor Punjab, with immediate effect,” the notification read.

Cheema had been causing problems for the PML-N in Punjab ever since he was given the post by Khan during his last days in power. The governor had triggered a constitutional crisis after he refused to administer the oath to CM Punjab Hamza.

Hamza was finally sworn in after the Lahore High Court ordered NA Speaker Raja Pervaiz Ashraf to administer the oath.

The federal government has nominated Baligh-ur-Rehman as the new governor of Punjab.

In response, Cheema refused to accept the orders regarding his removal issued by the Cabinet Division.

He said President Alvi had rejected the summary for his removal sent by the premier due to “exceptional circumstances” but the Cabinet Division still issued the notification for his removal.

Terming the notification “unconstitutional”, he said that he would consult legal experts and announce his strategy.

Responding to Khan’s demand, Minister for Information and Broadcasting Marriyum Aurangzeb said the PTI chairman, who himself had “sheer disregard for courts”, had no moral ground to appeal to the Supreme Court for taking notice of Cheema’s removal.

Aurangzeb said the “fascist era” of the Imran-led government would continue to be condemned for bullying the Constitution. It, she added, had exposed the “political hypocrisy” of the PTI chairman.

The constitutional posts of the governor, speaker and deputy speaker were disrespected at Khan’s whims, the minister said.

Marriyum said the “drama of constitutional violations” staged by the PTI leadership in the National Assembly before the vote of the no-trust motion was repeated in the Punjab Assembly as well.

The unconstitutional and fascist approach of the PTI leadership had led to the opening of court doors at midnight opening, she added.