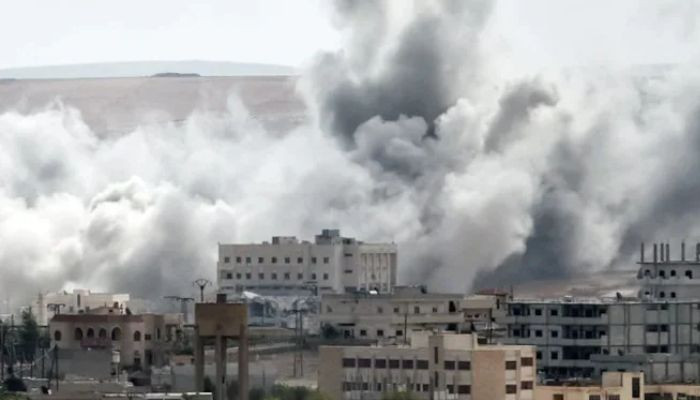 “The hour of reckoning has come,” the Turkish defence ministry tweeted early Sunday, along with a photo of a plane taking off for a night operation, without specifying the location.

“They […] will have to be held accountable for their treacherous attacks,” it said.

“Terrorist hotbeds razed by precision strikes,” the ministry said in another post, which was accompanied by a video showing a target being selected followed by an explosion.

While Ankara did not give details of the operation, Kurdish forces said Kobane in northeast Syria had been hit by Turkish raids.

“#Kobane, the city that defeated [Daesh], is subjected to bombardment by the aircraft of the Turkish occupation,” tweeted Farhad Shami, a spokesman for the Kurdish-led Syrian Democratic Forces (SDF).

Turkey considers the Kurdish People’s Protection Units (YPG) — the main component of the SDF — an extension of the outlawed PKK.

“Turkish bombing of our safe areas threatens the whole region,” Mazloum Abdi, the chief commander of the US-allied SDF, tweeted.

The Turkish bombardments targeted SDF sites in the northern province of Aleppo and Hassakeh in the northeast, Rami Abdel Rahman, director of Syrian Observatory NGO, told AFP. SDF spokesman Shami also said there had been air strikes on two densely-populated villages in those areas.

The raids also targeted positions where Syrian regime forces are deployed in the governorates of Raqqa and Hassakeh, killing six SDF members and six members of regime forces, said the Syrian Observatory.

The NGO reported that the Turkish military had carried out more than 20 air strikes across the two provinces. The group has an extensive network of contacts across Syria.

Kobane, a Kurdish-majority town in Syria near the Turkish border was captured by the self-styled Daesh group in late 2014, before Kurdish fighters drove them out early the following year.

Both the PKK and the YPG have denied any involvement in the Istanbul attack, in which six people were killed.

But Turkish Interior Minister Suleyman Soylu has said Ankara believes the order for the attack was given from Kobane, controlled by Syrian Kurdish militia forces in northern Syria.