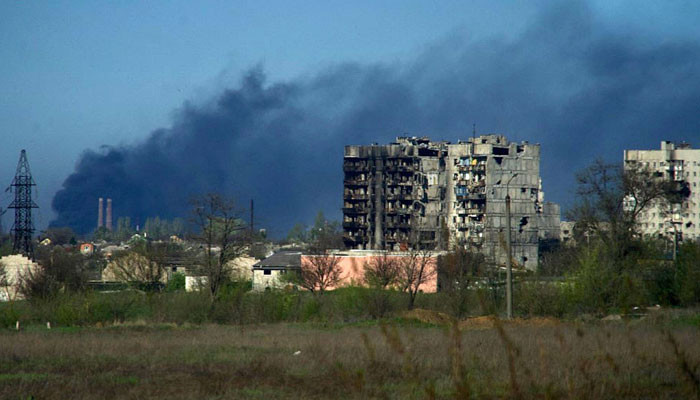 KYIV: Over 300 Ukrainians were evacuated from the battered city of Mariupol on Wednesday as President Volodymyr Zelensky asked the UN to help to rescue the remaining wounded trapped underneath the giant Azovstal steel plant.

Speaking to the nation in his usual evening address, Zelensky said 344 people were evacuated from Mariupol and nearby areas and headed northwest for the city of Zaporizhzhia, which is controlled by Kyiv.

But earlier in the day, he also pleaded with UN Secretary General Antonio Guterres to help rescue the wounded who are still sheltering at the plant.

“The lives of the people who remain there are in danger,” Zelensky told Guterres by phone.

In a statement, the Red Cross said it was “relieved that more lives have been spared” and called for renewed efforts to continue evacuations from the region “in light of the immense suffering of the civilians.”

Meanwhile, fierce battles with Russian troops continued to rage at the Azovstal plant, where Ukrainian soldiers had been holed up for weeks.

Moscow, which has denied any storming of the plant was taking place, said its forces would cease fire at the plant to open a humanitarian corridor for civilians for three days beginning Thursday.

“The Russian armed forces will from 8 am to 6 pm (0500 GMT to 1500 GMT) on May 5, 6 and 7 open a humanitarian corridor from the territory of the Azovstal metallurgical plant to evacuate civilians,” the defence ministry said Wednesday.

Civilians sheltering at the plant will be allowed to travel to Russia or Kyiv-controlled territory, the statement added.

In his conversation with Guterres, Zelensky said that this week´s evacuations showed the world “that international organisations can be effective”.

He “expressed hope for a successful continuation of the ongoing evacuation operation”.