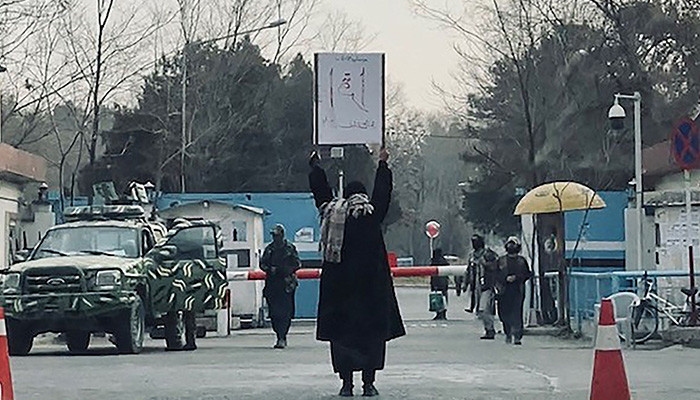 UNITED NATIONS: The United Nations Security Council (UNSC) on Tuesday called on the Taliban to reverse policies targeting women and girls in Afghanistan, expressing alarm at the “increasing erosion” of human rights in the country.

In the latest blow to women’s rights in Afghanistan since the Taliban reclaimed power last year, on Saturday the rulers banned women from working in non-governmental organisations, sparking international outcry.

The Taliban have already suspended university education for women and secondary schooling for girls.

The 15-member UNSC said in a statement it was “deeply alarmed” by the increasing restrictions on women’s education, calling for “the full, equal, and meaningful participation of women and girls in Afghanistan.”

It urged the Taliban “to reopen schools and swiftly reverse these policies and practices, which represents an increasing erosion for the respect of human rights and fundamental freedoms.”

In its statement, the Council also condemned the ban on women working for NGOs, adding to warnings of the detrimental impact on aid operations in a country where millions rely on them.

“These restrictions contradict the commitments made by the Taliban to the Afghan people as well as the expectations of the international community,” it said.

The international community has made respecting women’s rights a sticking point in negotiations with the Taliban government for its recognition and the restoration of aid.

Earlier Tuesday, the UN rights chief warned of the “terrible” consequences such policies would have.

“No country can develop — indeed survive — socially and economically with half its population excluded,” Volker Turk, the United Nations High Commissioner for Human Rights, said in a statement.

“These unfathomable restrictions placed on women and girls will not only increase the suffering of all Afghans but, I fear, pose a risk beyond Afghanistan’s borders.”

Turk warned that banning women from working in NGOs would strip families of crucial incomes as well as “significantly impair, if not destroy” organisations’ capacity to deliver essential services, calling it all the more distressing with Afghanistan in the grip of winter, when humanitarian needs are at their highest.

Several foreign aid groups announced on Sunday they were suspending their operations in Afghanistan.

Women have also been pushed out of many government jobs, prevented from travelling without a male relative and ordered to cover up outside of the home, ideally with a burqa, and not allowed into parks.

“Attempts by the de facto authorities to relegate them to silence and invisibility will not succeed.”