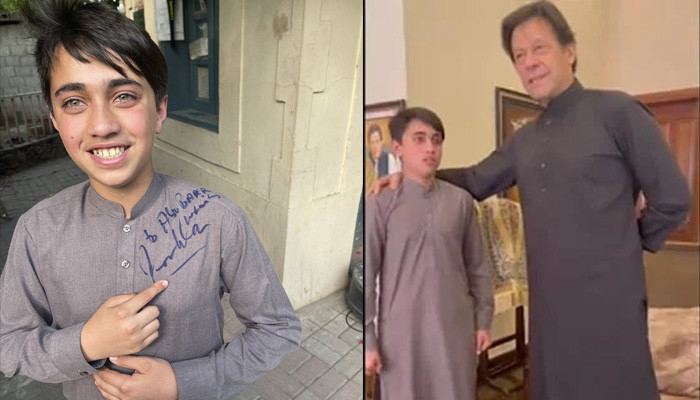 ISLAMABAD: The PTI shared a video of a young fan of the party chairman Imran Khan Thursday who met him at his Banigala residence following his passionate appeal to his idol.

In the video, that has gone viral on social media, the Lakki Marwat boy could be seen crying while hugging the former prime minister.

He had requested on camera to meet the party chairman during the Abbottabad jalsa.

The boy in the video, named Abu Bakar, was unable to meet the PTI chairman during the Sunday rally. However, his dream came true when he met Imran Khan and also got an autograph from him on his kameez (shirt).

Abu Bakr, who is a student in grade nine, couldn’t hold his tears back when he met Khan. He also gave him a ring as a gift.

The video also showed Khan continuously consoling the kid, saying: “You will do big things when you grow up, no need to cry.”

There were other PTI leaders in the video, too, including former foreign minister Shah Mehmood Qureshi and former special assistant to the PM Shahbaz Gill.

Later, Abu Bakar expressed his emotions while showing the autograph. He said that he cannot express how happy he was after meeting Khan.