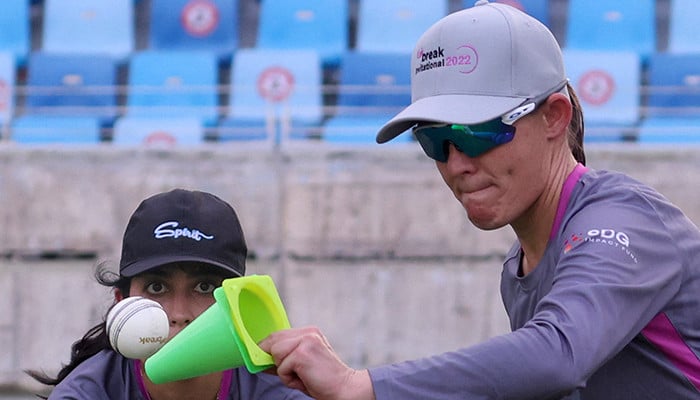 DUBAI: An innovative women’s cricket tournament grouping established stars with emerging-nation players starts this week as the sport looks to expand globally and outgrow its reliance on the men’s game.

Women’s cricket has emerged as a marketing hit in recent years with international finals played at sold-out stadiums, including a record 86,000-plus at the Melbourne Cricket Ground for the T20 World Cup decider in March 2020.

Progress was halted by the pandemic but the sport bounced back with a successful World Cup in New Zealand, Australia beating Knight’s England at a sold-out Hagley Oval last month.

Knight, whose Barmy Army-sponsored FairBreak team includes players from Vanuatu and Rwanda, said it was time that women’s cricket ended its financial reliance on the men’s game.

“I think there are discrepancies and certain things in the women’s game,” she told journalists at Dubai International Cricket Stadium on Monday.

“Sometimes the funding for example relies on the men’s game which I think needs to change.

“So I think this (tournament) is all about trying to help those associate nations, trying to grow the game globally.”

Women’s cricket, much like the colonialism-rooted men’s game, is heavily weighted towards a small group of well-funded countries that dominate the international competition.

Australia have won seven World Cup titles, followed by England with four. New Zealand, champions in 2000, are the only other team to win the tournament.

It’s no coincidence that Australia and England have the strongest support for women’s cricket, with high-level tournaments — the Women’s Big Bash League and The Hundred Women — and scores of professional players.

Other opportunities are limited for women players, especially those from the International Cricket Council’s associate nations — those that don’t qualify for Test matches, the five-day games considered the sport’s pinnacle.

India, cricket’s financial powerhouse and home of the lucrative Indian Premier League men’s tournament since 2008, is planning to start a women’s version next year.

“I’d like to see some more money, like the IPL, for sure,” West Indies skipper Taylor, who will captain the Tornadoes in the FairBreak event, told AFP.

“This (FairBreak) is adding to the leagues that we usually play in, like the BBL (Big Bash League) and the Hundred.”

The six-team Twenty20 tournament, which finishes on May 15, was originally planned for Hong Kong but moved to Dubai as the Chinese territory continues to struggle with coronavirus.

The ICC-sanctioned event, the brainchild of Australian entrepreneur Shaun Martyn, aims to develop the game across the world with players drawn from Bhutan, Tanzania, the Philippines and Japan, among others.

“Some of them have never been in these sorts of stadiums,” Knight said. “It definitely helps to develop players… It’s a breeding ground for players to improve.”

FairBreak director of cricket Geoff Lawson, a former Australia Test bowler, said the global talent pool ran deep with hundreds of players who could have been selected.

Warriors skipper Sindhu Sriharsha is a former India under-21 international who now captains the United States, which is targeting full ICC membership by 2030.

Despite Americans’ traditional love for baseball, basketball and the NFL, “there’s so much American cricket”, she said.

“The kids are already writing me telling me, ‘Can you please hook me up with them?’ and ‘I want to be playing this tournament in a couple of years’,” Sriharsha said.

“So there is so much interest about this, and it’s the same with other associate cricket nations.”